The NRW Restaurierungsprogramm  2014 further supports conservation and restoration of paitings by J.W. Schirmers and his pupils in the collection of Museum Zitadelle Jülich.

The paintings treated in this context are partly on display during the exhibition "LA STRADA - Maler unterwegs" im Museum Zitadelle Jülich.

Painters in the 19th century explored the landscapes of europe on a Traffic network harking back to roman times.

Italy and especially the city of rome were destinations of Yearning. These ravels  significantly  moulded their perception of culture and landscape. In this way the old roman trading atreries across the alps leave traces in the paintings of Johann Wilhelm Schirmer (1807–1863) and contemporaries. 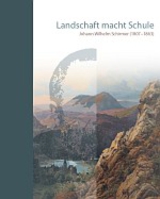 LA STRADA - painters on the road

The exhibition is kickoff for the touristic Projekt „ Erlebnisraum RÖMERSTRASSE“.
Paintings subsidised under the 2013 NRW conservation program feature prominently in the exhibition.