Wilhelm Morgner executed the painting "blue woman" in 1911 aged twenty. The lage format oil clearly conveys knowledge of pointilism and van Goghs and the fauves  work while displaying a very developed personal style. The painting draws its power from the strong composition and strictly ornamental features on the one hand and the extraordinary use of colour. It oscillates between flat ornamental design and strong illusion of depth and vast Space, imposing its energy onto the spectator.
The painting shows no signof insecurity and hesitation, while it is known from Morgners own letters how hard he struggled to find his way to create meaningful works of art.

THe work belongs to the collection of the Museum Wilhelm Morgner, Soest. It was sent on posthumous exhibitions after Morgners death 1917 by his frind Georg Tappert. War damage  led to early  emergency TReatment and later basic conservation. It now received comprehensive conservation and restoration treatment. 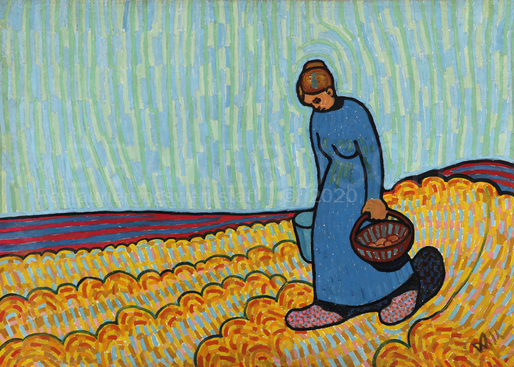